Colloids are particles that are dispersed in a continuous background medium. For example, they can be solid particles in a liquid (ink, blood) or in a gas (smoke), but also liquid in a gas (waterdrops in air, as in fog), gas in a liquid (foam), or liquid in a liquid (little drops of oil in water, such as in milk). Colloids are typically a few nanometers to a few micrometers in size. That is bigger than atoms and molecules, but smaller than objects that you can see with the naked eye (for comparison, an average human hair is approximately 100 micrometers in diameter). Colloidal particles are found in a lot of places, and may have many different shapes. Because they scatter light, they can make a fluid appear turbid, like they do in milk. In the laboratory it is possible to make large quantities of colloids with the same composition, size and shape, for example silica or polymer spheres with a diameter of ca. 1.06 micrometer (image below): 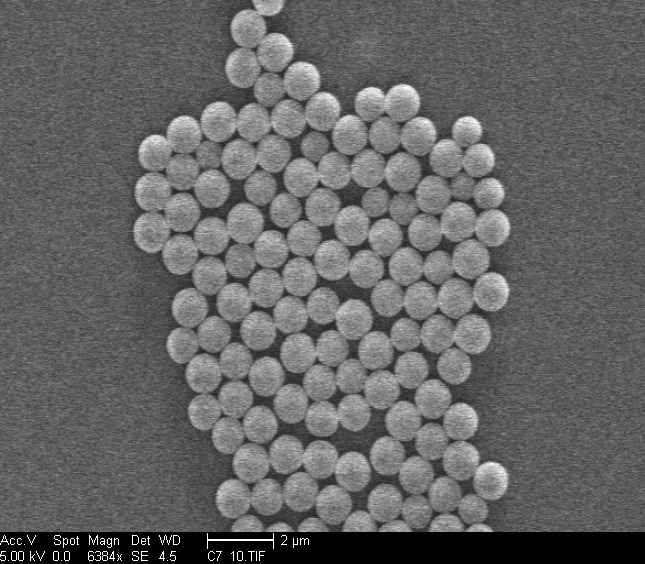 Colloids inside a liquid exhibit Brownian motion, which means that they move around under the influence of constant collisions with solvent molecules (see movie below). Because these molecules collide on all sides of the colloidal object, this movement is random, at least as long as there are no obstacles that the colloid will interact with along its way. Still, after a given amount of time, colloids will have travelled a certain distance from the place where they started. This enables them to explore many different configurations and spontaneously organize themselves, which is different from the macroscopic objects that are present in daily live. As a result, colloids collectively behave similar to atoms and molecules in many ways. For example, they can form crystals, gels, glasses, liquids and gas-like phases.

Another great thing about colloids is that they can be studied with light microscopy. Since colloids move relatively slowly, it is possible to follow their movements in time, which makes them excellent model systems to study a broad range of different phenomena.

The movie showing Brownian motion of micron-size colloids (above) was recorded using a technique called confocal laser scanning microscopy. With this, it is possible to sharply image a single small region at a point inside a sample. By `scanning’ a plane by constantly replacing the focal point, a 2D image can be constructed. The positions of the colloids can be extracted from such an image by using image analysis algorithms. In addition, it is possible to create a 3D reconstruction of the sample by scanning multiple planes at different depths. The movie above was extracted from a sequence of 2D images obtained by confocal laser scanning microscopy. The colloids contain a fluorescent dye.